Not finding what
you need? 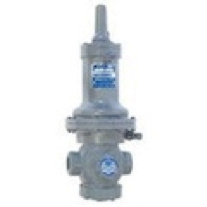 The heart of the Model 461-57S is the “Roll-Out” diaphragm. The 461-57S is a spring regulator with performance which approximates that of a pilot operated regulator. The “Roll-out” Diaphragm makes this exceptional performance possible because its action reduces “droop” to a minimum (“droop” being fall off in outlet pressure as a spring regulator opens to increase flow.)
The action of the “Roll-Out” diaphragm differs from that of the conventional diaphragm in the manner in which the change in effective area occurs. Where the effective area of a conventional diaphragm would increase as the regulator opens, the “Roll-Out” area decreases. Conversely, where the area of the conventional diaphragm decreases during closing, the “Roll- Out” area increases. The following explanation and the illustrations below show how this affects regular performance.
Spring type regulators are operated by the inter-action between spring and diaphragm. The compressive force of the spring works to open the regulator and is balanced by the opposing force of outlet pressure on the diaphragm which provides
the closing force.
As the regulator opens, the compressive force of the spring decreases. However, as this spring force decreases, there must be a corresponding decrease in the opposing force from the diaphragm. For this opposing diaphragm force to decrease, either the
effective area or the outlet pressure must decrease. Herein is the essential difference; with a conventional diaphragm the outlet
pressure must decrease, where as with the “Roll-Out” diaphragm it is the effective area that decreases, permitting the outlet pressure to remain constant. The operation actually is quite simple, yet the action of the “Roll-Out” diaphragm is so effective that “droop” is practically eliminated.
The Model 461-57S provides constant pressure regulation not previously possible in a “pounds to pounds” spring regulator. It approaches pilot performance, and, in addition, offers the further advantages of simplicity, dependability, freedom from freeze-up, and exceptionally fast response.